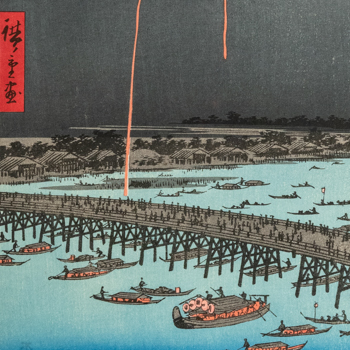 In the Edo era, the summer season began on May 28 and ended on August 28, and on its first day fireworks were displayed at a festival marking the opening of the boating season. The Sumida River was the scene of a custom known as “taking in the cool of the evening” where along the river sides, tea shops, show tents and stands were set up and crowded by the people who enjoyed a summer night. The activity mainly centred at Ryōgoku Bridge. Ukiyo-e woodblock printing flourished from the 17th through the 19th centuries. The term translates as “picture[s] of the floating world”. 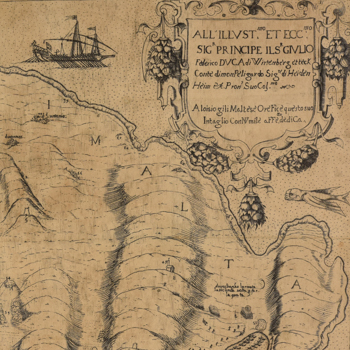 Grand Master Alof de Wignacourt (1547-1622) coordinated the defence of Malta from the attack, known as ‘razzia’, of a Turkish fleet in 1614. The attack was concentrated on the village of Żejtun. The Ottomans were defeated by men from the fleet of the Order of St John and by Maltese militia. The map by Aloisio Gili illustrates the landing of the Ottoman fleet and their attacks on the Maltese villages. Gili was a silversmith and cartographer coming from a Sicilian family. This is the first printed map produced by a Maltese. All the towns on the island are numbered and their names are provided at the bottom, giving us an insight into old place names, especially of towns that no longer exist.
Photograph courtesy of the Malta Study Center at the Hill Museum & Manuscript Library, MUŻA, and Heritage Malta 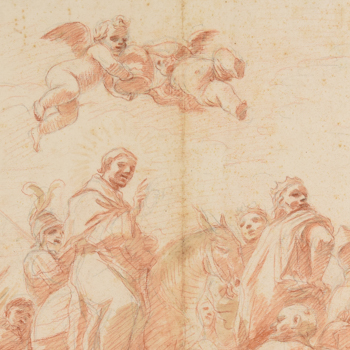 St Peter Celestine (Pope, c.1221-1296 A. D.) is shown proceeding to the cathedral of Aquila, to be ordained bishop of Rome, being accompanied by two kings, and a number of princes and others. He could not be prevailed upon to travel any other way than riding on an ass; he even thought it a great deal that he did not go on foot, as he desired to do. He was consecrated and crowned at Aquila on the 29th of August 1294, taking the name of Celestine V. Charles, king of Naples, is shown in front of him walking after a cross. This is a drawing after Mattia Preti’s first painting from the entrance on the ceiling of the nave in San Pietro a Majella in Naples.
Photograph courtesy of the Malta Study Center at the Hill Museum & Manuscript Library, MUŻA, and Heritage Malta 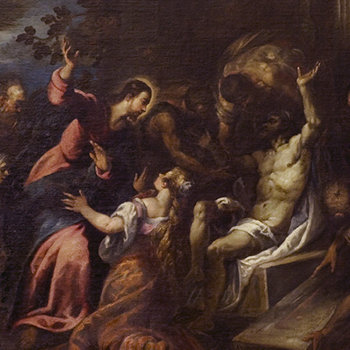 ‘The Raising of Lazarus’ by the Italian painter, Andrea Vicentino, characteristically reflects his Venetian Mannerist influences. He was particularly impacted by the dynamic and emotionally charged style of the great master, Tintoretto. Vicentino’s love for the powerful effects of the dramatic diagonal are seen in this composition which is based on a narrative of commotion accentuated by expressive gestures. The intimate connection between Christ and Lazarus is represented by their raised hands. Enlivening bursts of colour are moderated by areas of misty chiaroscuro that enhance the overall sense of restlessness. This painting comes from the Grand Masters’ Palace Collection. 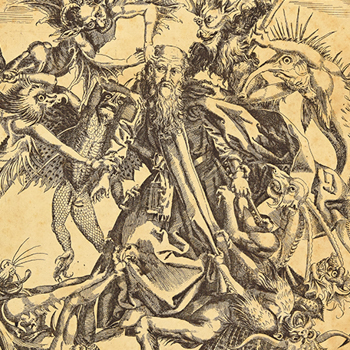 This etching of St Anthony tormented by demons is an interesting example of fakes and copies in printmaking. It shows St Anthony levitating in the sky above a landscape as fantastical demonic creatures attack him. It is an anonymous eighteenth-century copy after an engraving by Raphael de Mey, made in 1590, which in turn is a reversed copy after Martin Schongauer’s iconic engraving dated 1470-75. Schongauer’s engraving was so popular that Michelangelo painted a copy of it. This eighteenth-century copyist added the monogram of Albrecht Dürer as it was very well known and Dürer prints were very popular and easier to sell.
Photograph courtesy of the Malta Study Center at the Hill Museum & Manuscript Library, MUŻA, and Heritage Malta 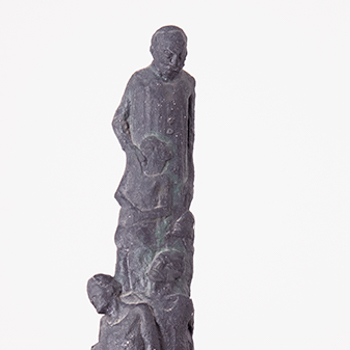 The National Collection has recently been enriched with the acquisition of the bozzetto for the Dun Mikiel Xerri monument by Anton Agius, erected in Independence Square in Valletta in 1986. It commemorates the death of Dun Mikiel Xerri and his companions, showing the moment when they were shot dead by the French on 17 January 1799 after they spearheaded an unsuccessful Maltese revolt.
The bozzetto in patinated plaster, like the finished monument, shows Dun Mikiel Xerri still standing with his fallen companions at his feet. The crude, less defined figures in the bozzetto make it a powerful emotional work that conveys the horrors of the execution.