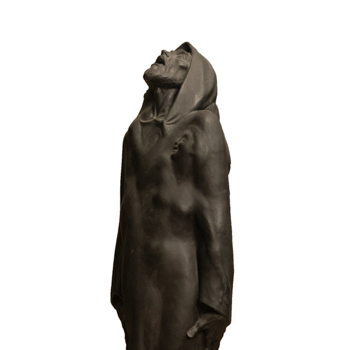 Manifesting his precocious artistic talents at the young age of 23, Vincent Apap represents Saint Anthony the Abbot can be considered to be one of the most powerful sculptures of the Modern period. Standing stiffly and paralysed by an acute state of physical and psychological tension, Apap’s figure of the saint is caught at the instant when diabolical temptation seizes and literally ceases his body. Hints of female heads and figures sensually rising and writhing beneath the monk’s clothing make up the corporeal temptations that St Anthony is afflicted by. His severely vertical stance, the protruding veins and bone structure of his wide-opened hands and the culminating gaping mouth are all highly expressive signs of this ascetic monk’s profound agony. It is thanks to Apap’s profound sensitivity and deep knowledge of the human figure that this sculpture is so striking to the core albeit so simple and so essential in its rendering. 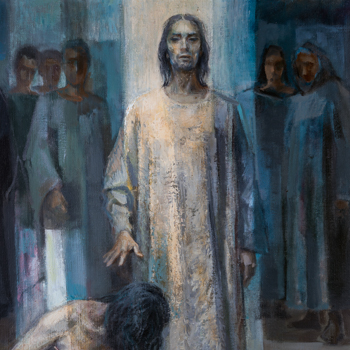 ‘Benedizione’ by Willie Apap is a key work which manifests his unique technique in which he used vertical columns of paint to give light and drama to his compositions.
The standing Christ, looking towards the audience, has one hand above Mary Magdalene’s head while the other is left hanging straight. Mary Magdalene, the sinner, is represented as a sensual kneeling woman whose face is covered by her long black hair.
A crowd of people stands at the very back of the two central figures, appearing dissolved in a misty dark atmosphere. These are the Pharisees who have just accused Mary Magdalene of adultery. 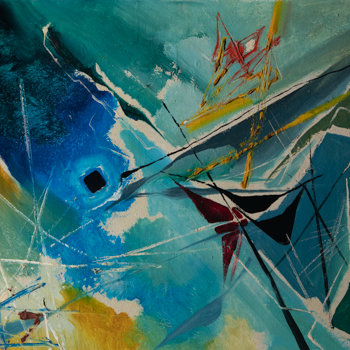 This abstract work forms part of a series of works by Emvin Cremona which were exhibited at the 29th Venice Biennale edition and were considered a milestone in the development of Maltese art. This is because the work of art is a pure abstract painting without any compromise.
The composition in this work is reminiscent of different abstract styles that interestingly enough show Cremona’s individuality. Cremona’s previous academic training appears in how he places and applies brilliant colours on the canvas. Furthermore, with the use of black lines that follow alongside the colours, he gives more solidity to the composition. In contrast to these bold black lines, white splashes of colour and lines appear. These make the work look more playful and pleasant to the eye. 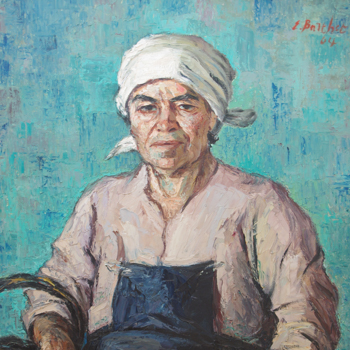 ‘Marì tal-Bajd’ is a landmark in Maltese 20th-century portraiture. As a non-commissioned work, this portrait is less formal and more expressive. The sitter is presented in a frontal position dressed as a typical street hawker.
Stylistically the work captures Barthet’s interest in Cezannesque brushwork and Van Gogh’s psychological interpretation of people. The latter is clearly represented in the facial expression and the earthiness of the sitter can also be compared to Van Gogh’s “Potato Eaters”. The sitter’s particular character is further enhanced by the texture of the paint which is worked with a palette knife.
The composition leads the attention of the viewer to the sitter’s unpretentious face, down to her hands: two strong elements that introduce the spectator to a person working outdoors in the elements. Barthet shows interest in a more experimental format which was very popular throughout the century especially in central Europe. 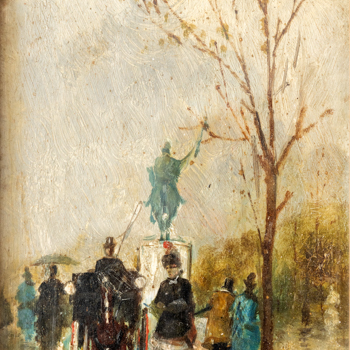 De Nittis trained at the Accademia in Naples under Gustavo Mancinelli and Gabriele Smargiassi and became a member of the Macchiaioli in Florence. He was influenced by the free ‘plein air’ techniques of the Impressionists. In 1874, he was invited by Edgar Degas to include five of his paintings in the First Impressionist Exhibition.
The two paintings within the National Collection follow the typical composition used by this artist showing solitary figures in wintry parks. These works represent modernity in the form of the well-dressed haute bourgeoisie on the streets of Paris. De Nittis artfully contrives a subtle asymmetrical composition, in which the street pulls the viewer’s attention to the walking women. 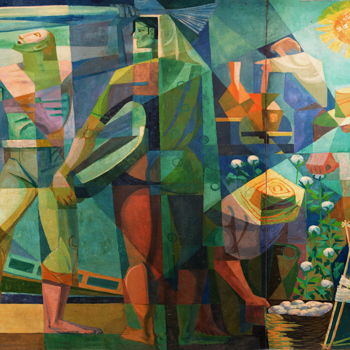 This mural formerly decorated the lobby of Mellieħa Bay Hotel. It represents workers engaged in local trades and crafts such as fishing, spinning cotton, weaving, pottery, water carrying and selling vegetables, thus representing aspects of Maltese identity. Portelli was an innovator in Malta’s artistic scene, finding his own niche by catering for the booming tourism industry. He also applied his artistic skills and style to design, particularly of interiors.
Portelli’s audacity as an artist determined to break the mould is testified by his use of the international style of Crystal Cubism, a form of Cubism which bloomed in the period around the First World War. The style was particularly appropriate for this mural because, while Portelli often depicted the subject of workers, he is here primarily concerned with formal rather than figurative aspects. Serving as a backdrop to the ‘crowd’ of portraits in the first part of ‘The Artist’ Galleries, the fact that Portelli treats such a theme in the visually innovative way that he did, and when Malta had just gained Independence in 1964, makes this mural a forceful statement of the island anchoring its peculiar characteristics and customs. 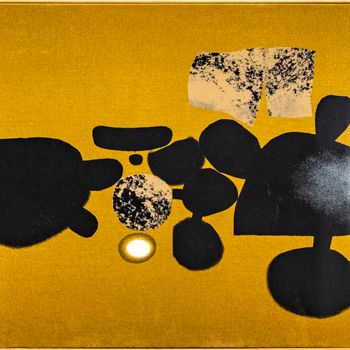 This work forms part of a series called ‘Screenprints with poetry’ produced in 1973-74 and printed at Kelpta studio. Apart from the outstanding typical iconography used by Pasmore, a short poem is included on the left-hand side of the work.
For this composition, the artist worked on different planes with the use of colour which he managed to balance with different shapes to convey harmony on this long canvas. This was also achieved with the use of the black lines and dot motifs which were commonly used by Pasmore from the mid-1960s onwards. Taking a closer look at this very unique piece, one realises that the artist used the collage technique and that some of the symbols are not painted but are pieces of canvas stuck on the surface. This playful technique was very much used by the artist, especially after he settled in Malta. 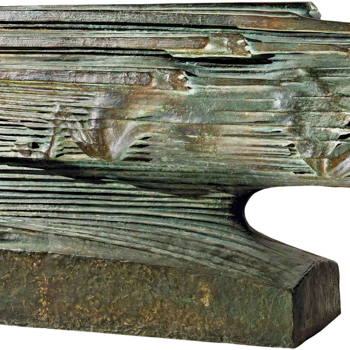 ‘Speed’ is one of Antonio Sciortino’s equine sculptures but it aims to express an abstract concept, that of speed. The horses seem to blend into one another as they race forward and are reduced to little more than horizontal lines. The stylisation of the sculpture betrays an Art Deco influence, but the concept and the use of lines to depict movement look towards Futurism. The lines are the gushes of displaced air caused by the forward projectile movement of the horses. Only the horses’ heads with flaring nostrils and their front legs remind us that this is a figurative work.
Sciortino felt strongly about this piece, describing it as a strong power passing through which no obstacle can stop, leaving behind a force leading in the opposite direction.